Sanibel Island is recognized as one of the world’s best beaches.  It is also known as one of the best family getaway locations for island vacations.  The island is very close to the mainland, but it feels like another world.  Gentle aquamarine waters of the Gulf of Mexico, golden sand and warm sun hold sway throughout the year.  Sanibel is 12 miles long and 4 miles wide, and is famous for the world-class shelling beaches which stretch along the coast.  The unique geographical orientation from east to west makes the beaches perfect for collecting shells from the Gulf of Mexico.  With no traffic lights, neon or high-rises, Sanibel has an authentic old-world Island charm.  It is unlike anything else in The United States and a Sanibel Island vacation is a dream.

The Sanibel-Captiva Barrier Islands are a relatively new geological feature.  It was formed within the last 6,000 years – a geological blink of an eye.  The islands formed as a result of siltation and accretion, as sand was pushed onto the bedrock forming the sea floor at the edge of the mainland.  Nearly half of the 12,000-acre island is designated for conservation and preservation.  This is most notably in the form of the J.N. “Ding” Darling Wildlife Sanctuary, which is the largest undeveloped mangrove sanctuary in the United States.  Sanibel Island has been continuously inhabited since at least 500 B.C.E, first by the Calusa Indians, then by European settlers after it was first “discovered” by Ponce De Leon in 1513.

Legend has it that Ponce De Leon named the Island “Santa Isabella” after Queen Isabel while searching for the “Fountain of Youth.”  In 1523, after two years attempting to establish a permanent colony, and searching in vain for the secret of eternal youth, Ponce de Leon was struck by an arrow and gravely injured in a battle with a Calusa raiding party.  The Spaniards abandoned their colony in defeat and retreated to Cuba, where De Leon died from his wounds.  Other legends claim the Island was named by the first mate of the famous pirate Gasparilla, after his beautiful lover Sanybel, whom he had left behind in Spain.  The first known appearance of a named location on the island is from a map dated from 1765.  The map was labeled Puerto de S. Nibel.  Furthermore,  the historic lighthouse is located at Point Ybel, derived from the original name, Santa Ybel. 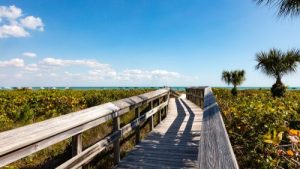 Sanibel is the perfect backdrop for stories of pirates and buried treasure.  Many colorful and interesting characters have made the island their home.  the first modern settlement on Sanibel, or “Sanybel” as it was known at the time, was established by the Florida Peninsular Land Company in 1832.  The colonists abandoned Sanibel just 17 years later in 1849.   After the island was repopulated in 1862, permission for a lighthouse was granted.  The lighthouse was not begun until 1884, but was completed just a few months later.  Since that time, Sanibel has been one of the best kept secrets for vacationers lucky enough to discover it.  Through conservation, care and the love of the people who live, work and visit here, the Island maintains the rustic seaside charm which has made it the gem of the Gulf for the last 100+ years.

Modern Day Sanibel Island hasn’t changed much.  There are no traffic lights, and one main road.  In addition, boutique shops and restaurants are alive with character. People are friendly, and it is one of the safest cities in America.  Perfect for families, and pets are welcome at many hotels, condos and beaches. Furthermore, warm, sunny days are the norm, and the beaches are never crowded.  The water is warm and calm, and the bottom is soft.  Half of the island is conservation lands or sanctuaries.  The Island also has activities for everyone.  You can spend the day fishing, snorkeling or swimming.  Collect shells from the beach or sunbathe.  Go hiking, bike riding or kayaking.  Watch live music while you eat at one of the great restaurants.  Check out the Farmers markets, or visit the great art galleries.  Whatever you like to do, you will find it on Sanibel Island